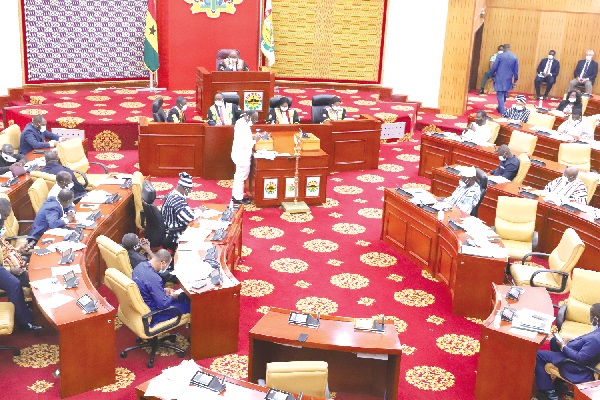 The Minority in Parliament yesterday took a swipe at the Minister of Finance for failing to use the presentation of the first quarter budget for 2021 to tell Ghanaians the current true state of the economy and its achievement in honouring the promises the government made to the people.

It said instead of providing information on the performance of the economy this year, Mr Ken Ofori-Atta focused on telling Ghanaians what happened in 2019.

We have the numbers

Reacting to the presentation of the Expenditure in Advance of Appropriation for the first quarter of next year to Parliament at a press conference yesterday, the Minority Leader, Mr Haruna Iddrisu, said: “Besides stating that the economy had contracted in terms of growth and revenue mobilisation, the minister failed to tell us the debt-to-Gross Domestic Product (GDP) ratio, the domestic debt and the international debt.”

“We do not have the numbers and he sought to hide behind 2019 numbers and the reckless expenditures the government is making in the name of the coronavirus disease (COVID-19) pandemic and giving money to parliamentary candidates.

Mr Ofori-Atta was billed to present the budget early morning, but showed up a little after midday and presented the budget after 1.20 p.m. to the House, which had an encouragingly high turnout.

Contrary to previous budget presentations that drew protests from the Minority side, there was absolute order in the House yesterday when the minister presented the budget.

The Minority Leader said with the Finance Minister intent on borrowing between $3 billion and $5 billion through sovereign bonds, he could best be described as the only Minister of Finance who celebrated borrowing.

“Our debt-to-GDP, by the IMF’s latest report, is 74.6 per cent, and even into 2021, it projects that it will only fall to 74 per cent. That means that we are a debt risk-distressed country and we will pay more on interests on debts.

He expressed his preparedness to demand information on the McKenzie Group which, he alleged, was currently running the various ministries and the Ghana Revenue Authority (GRA).

“We want to know how the state has so far paid to the McKenzie Group, as the Minister of Finance is not running the ministries,” he said.

Contributing, the Member of Parliament (MP) for Yapei Kusawgu, Mr John Jinapor, said when a former Minister of Finance appeared before Parliament in 2016 to present the budget for the first quarter of 2017, he requested about GH¢10 billion, as against the GH¢27 billion the current Finance Minister had requested.

Out of the GH¢27 billion, he said, over GH¢10 billion would be used for debt servicing, an indication that the country was in dire straits.

He said the latest report of the IMF revealed that Ghana’s debt-to-GDP was projected at 76 per cent, compared with the 56 per cent debt-to-GDP when Mr Ofori-Atta became the Finance Minister.

“The nominal debt has moved up by GH¢150 billion, but when you increase your debt, you have to increase the base of your GDP, so that it can support that debt, which has moved from 57 per cent to about 80 per cent.

“When a middle-income country crosses the 70 per cent mark, it means that you are hugely debt distressed and so we don’t need the IMF to come and tell us Ghana is HIPC. By the Finance Minister’s track record, Ghana falls into the category of a HIPC country,” he said.