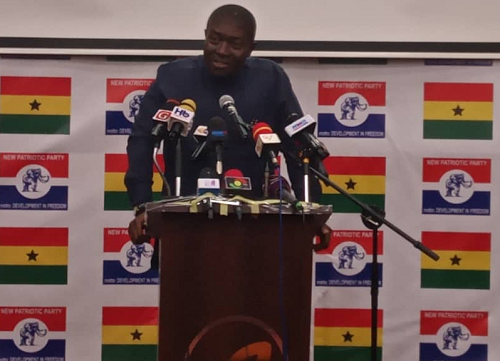 The Managing Director of the State Transport Company (STC), Nana Akomea is urging Ghanaian youth to vote massively for the New Patriotic Party (NPP) in the upcoming December 7 polls since the party is all for the youth.

According to him, the NPP is the only party in the Fourth Republic that has the interests of the youth at heart.

For him the party, with the youth in mind, has introduced several youth-centered interventions, including the National Youth and Employment Agency and NABCO to create more opportunities for the Ghanaian youth.

Speaking at the NPP’s weekly press conference in Accra on Monday, October 26, 2020, Nana Akomea, who is a former Director of Communications of the party, said the party will introduce more youth-centered interventions in its next government, hence admonishing Ghanaian youth to vote to retain the party in power.

He said one problem which faces the youth and which the NPP government intends to address, is the issue of rent.

According to him, to address the rental issues in the country the NPP government will introduce the National Rental Assistance Scheme, to provide low interest loans to eligible Ghanaian youth solely to enable them pay for rental accommodation.

Nana Akomea said under the scheme, the beneficiary youth will repay the loans on a monthly basis, explaining that government “will set up seed capital of GH¢100 million, which would also serve the purpose of a leverage to attract additional investment from the private sector.”

According to him, the National Rental Assistance Scheme “Will target Ghanaian youth in both formal and informal sectors, with identifiable or regular income.”

For him, the rent advances would be paid directly into the bank accounts of beneficiary landlords.

Touching on jobs, Nana Akomea said the next government of the NPP will double up its steps in creating more jobs for the youth, pointing out that the party between 2017 and 2019 has created over two million direct and indirect jobs for the Ghanaian youth.

He explained that 778,000 of the jobs are in the public sector, 268,000 in the formal private sector and 1,000,000 in government job creation programmes, including the Nation Builders Corps (NABCO).

He said the party will also intensify its One District One Factory initiative to create more jobs at the various districts of the country.

“The Ghanaian youth should be particularly excited about the massive and sustained industrialization programme going on in this country, the very famous 1D1F,” Nana Akomea said, adding “This particular programme, in the next four years should result in a factory/manufacturing facility in every district in our country.”

He added “These factories will throw up tens of thousands of direct jobs for you the youth”, saying “This is a reality that will come to pass in the next four (4) years in the NPP government.”

He noted that the NPP administration has digitised application processes for building operating permit and license, public sector procurement, courts, vehicle insurance database, electricity purchasing, and online filing of taxes, among others.

He said the digitization of the Ghanaian economy was to eliminate the human contacts as well as fast-track processes of doing business in the country.