President Donald Trump is frequently contrasted with his Oval Office
predecessor Barack Obama — comparisons Trump sometimes encourages, to
highlight himself, while detractors frame it in reverse.

On Sunday morning, Trump, 73, confirmed reports that al-Baghdadi had been
killed in a nighttime military raid that weekend. 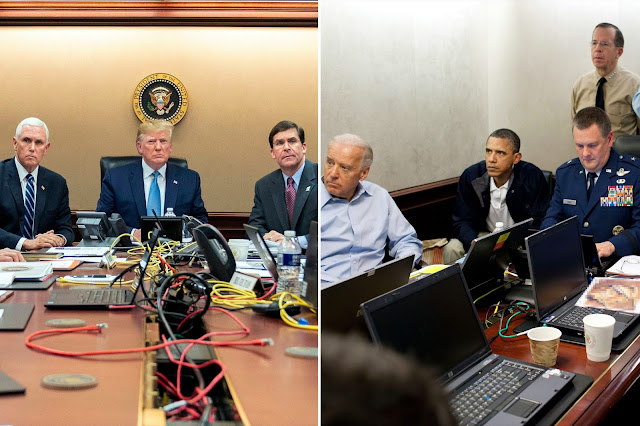 Speaking with reporters, Trump seemed to subtly distinguish al-Baghdadi’s
killing from that of terror mastermind Osama bin Laden, who died in a U.S.
military operation under President Obama in 2011.

As Trump did, Obama announced news of bin Laden’s death in a widely watched
statement from the White House.country,’ a caliphate, and was trying to do it again,” Trump said Sunday.

“The thug who tried so hard to intimidate others spent his last moments in
utter fear, in total panic and dread, terrified of the American forces bearing
down on him,” Trump said of al-Baghdadi.

After his announcement, photos were quickly released which showed him
monitoring the operation from the White House’s Situation Room.

In the images, Trump sits directly in the center of the frame with a serious
look on his face, as he appears to look straight into the camera lens. Seated
next to him around a table are Vice President Mike Pence, Secretary of Defense
Mark Esper and other members of the administration — all of whom have composed
looks on their faces and are either wearing suits and ties or military
uniforms.

Many critics online were quick to point out just how different Trump’s photos
look compared to images taken in 2011 when Obama, 58, and senior
administration officials monitored the raid which killed bin Laden. 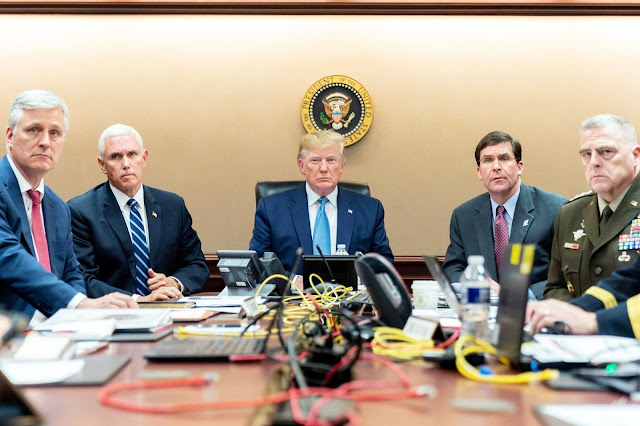 The 2011 photos show Obama wearing a polo shirt and a jacket, leaning forward
next to Brig. Gen. Marshall Webb, who sits at the head of a table in front of
a laptop, which was used to communicate with military personal on the ground
in Afghanistan.

Former Secretary of State Hillary Clinton can also be seen seated around one
side of the table with her hand over her mouth while in the background many
additional members of Obama’s administration crowd closer, as though to see
more of the operation.

“Which of these pictures looks real and which looks posed?” David Axelrod, a
former senior Obama aide and now a senior political commentator for CNN, wrote
on Twitter alongside a side-by-side of the two shots. 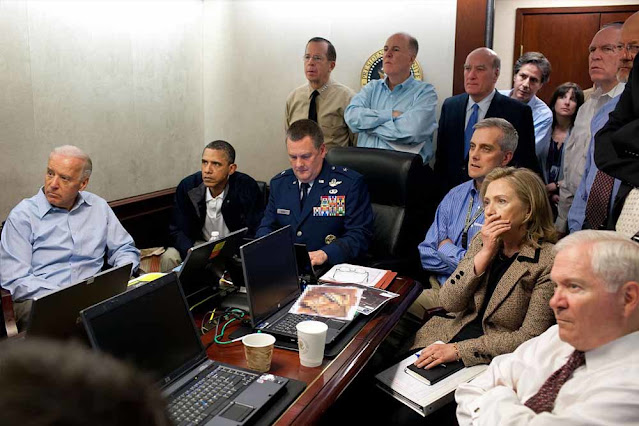 In addition to retweeting the image, Pete Souza, who worked as the director of
the White House Photography Office during Obama’s time in office, pointed to
an apparent time-stamp discrepancy implying Trump’s photo may have been staged
— an unproven claim.

Souza soon walked back his suggestion.

The theory that the images were taken after the raid was completed is also
based on multiple reports that Trump spent time on the golf course on Saturday
and didn’t arrive at the White House until after 4 p.m., according to Snopes.

However, the contention that the raid took place at 3:30 p.m. is reportedly
inaccurate.

“Yes, the photo looks staged as hell, but this timing controversy is based on
a false premise,” Taub added.

White House spokeswoman Stephanie Grisham told PEOPLE: “The photo was taken
during a portion of the raid and was not staged.”

Souza went on to clarify his statements, writing, “just to be clear, I didn’t
say it was staged.”

“Trump himself said he didn’t arrive to the Situation Room until ‘around 5pm’.
So it’s definitely possible the photo was taken during the raid,” Souza wrote,
later replying to his original tweet with updated reporting from The New York
Times.

“The latest reporting from the NYT: the helicopters left Iraq at 5PM
(Washington time), and they reported it was about a 70-minute flight to Syria.
So actual raid had to happen some time after 6:10PM,” he wrote, which would
line up with the time stamp on the White House photo.

Commenting on the photographs themselves, Souza pointed out that when
photographing the White House reaction to the bin Laden operation in 2011, he
took many more images than the one that was first released.

“During the raid itself, I made around 100 photos. I chose what I thought was
the best one. I made around 1,000 photos throughout that day. Every photo was
saved (as required by the Presidential Records Act), and eventually every
photo will be made public,” Souza wrote.

He also included a link to several other images from the day, one of which
showed Obama appearing to sit at the head of a table in the Situation Room, as
Trump did in his photo.