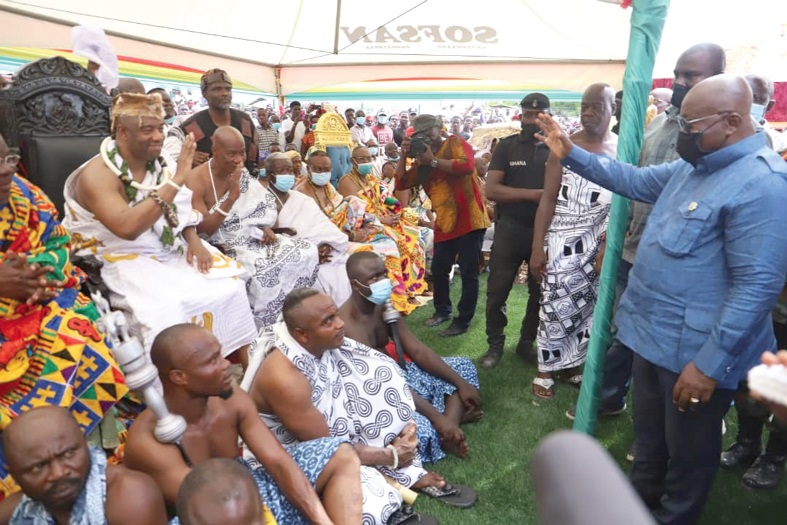 He said the acts were perpetrated by some frivolous minds who had no message and good track record for the elections.

President Akufo-Addo was speaking at a durbar at Odododiodio in Accra last Tuesday with the chiefs and people of the area in attendance.

The durbar was part of the third-day activities of his four-day tour of the Greater Accra Region.

He said the NPP had delivered on its promises, had a good track record and was confident that Ghanaians would renew its mandate with a massive vote.

“The world needs to see that we can comport ourselves. We want peace in Accra, exercising one’s franchise does not call for chaos,” he said.

He started the third-day tour from the STC yard, where he commissioned 100 buses for the company.

At Abossey Okai, President Akufo-Addo said prior to the 2016 polls he made promises which made the people to vote for him and by the grace of God he had redeemed the promises to the satisfaction of Ghanaians and was assured of a second resounding victory.

President Akufo-Addo said he was always encouraged by the support and encouragement the people in the area offered him, which indicated that he was on his way to a resounding victory.

He said anytime he got to the area, the enthusiasm of the people revived the youthfulness in him. He urged the electorate to vote massively for him, more than what they did in 2016.

He stated that in his next administration from 2021 he would embark on more development and interventions in excess of what had been witnessed in the first four years.

President Akufo-Addo said God had been gracious to him and placed him on the number one spot on the ballot, and urged the people to come out in their numbers and vote for him.

Addressing the gathering, the Minister of Foreign Affairs and Regional Integration, Ms Shirley Ayorkor Botchwey, said the President had ensured that almost every Ghanaian had benefited from the work of his administration.

She said education was a cardinal instrument in poverty alleviation, and that it was for that reason that the President instituted the Free Senior High School (SHS) policy so that irrespective of the background of the parents, every child would have free secondary education.

The Sempe Mantse, Nii Otintoh, described the gathering as exceptional because the President was able to bring all the chiefs together at the function, something that had never happened.