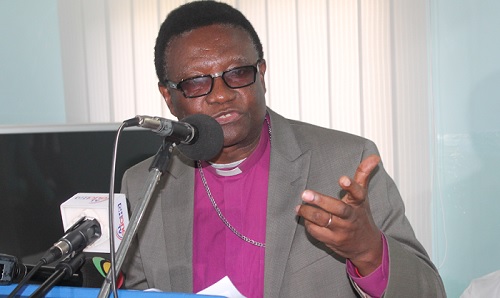 The Most Reverend Professor Emmanuel Asante, the Chairman of the National Peace Council, Ghana

The National Peace Council (NPC) has condemned last Sunday’s clash between supporters of the New Patriotic Party (NPP) and the National Democratic Congress (NDC) at James Town in the Odododiodio Constituency in Accra.

It said it hoped that the police would expedite action on the matter and bring those responsible for the incident to book to serve as deterrent to others who might have the intention of instigating similar occurrences.

The Executive Secretary of the NPC, Mr George Amoh, who condemned the incident in an interview with the Daily Graphic yesterday, said in the face of public education on the need for political parties to conduct their activities peacefully, it was surprising that supporters of the two parties would resort to violence.

Supporters of the NPP and the NDC were engaged in a bloody clash that left many people on both sides with injuries.

In the course of the misunderstanding, a tricycle was set ablaze.

The injured people were sent to the Korle Bu Teaching Hospital and are receiving treatment.

According to the police, the clash occurred in the course of a health walk by the NDC in the constituency when a misunderstanding between a group of young men at an area known as Blue Gate resulted in the throwing of stones and bottles at each other.

Video clips shared widely on social media platforms showed supporters of the two parties throwing bottles and stones at each other, amid the hurling of insults.

Mr Amoh said the situation was unfortunate, adding that “our regional office is handling the matter, and as such we will give details later”.

“We condemn what happened because we do not expect them to go this way. But we are human beings and sometimes these things happen, but when they do, we have to put in the appropriate response,” he said.

He said the NPC was in touch with the police for the investigations to be conducted with dispatch, so that whoever was at fault would be made to face the full rigours of the law.

At a press conference yesterday, Mr Bannerman said there was a tricycle filled with empty bottles among the procession of participants in the NDC health walk last Sunday.

He added that when the crowd got to the Atta Mills Highway, some NDC supporters besieged the NPP party office in the vicinity and vandalised the place, without any provocation.

“If this incident had not been planned already, why were they carrying empty bottles and what exactly did they plan to do with the items?” he asked.

“We all owe it a duty to the people of Odododiodoo, and by extension the country, to jealously protect and safeguard the peace and stability that we continue to enjoy before, during and after the 2020 general election,” he added.

Several attempts by the Daily Graphic to speak to Mr Vanderpuije proved futile, as calls and text messages to his phone were not answered.