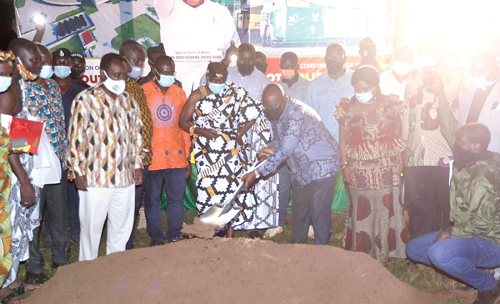 President Nana Addo Dankwa Akufo-Addo has cut the sod for a multipurpose stadium and a solid waste treatment plant for the people of the Oti Region.

The facilities will be constructed in collaboration with the government and the Jospong Group of Companies (JGC) with its partner, Komptech.

The waste plant is expected to be completed within four months, while the stadium will begin immediately after the completion of the waste plant.

At the sod-cutting ceremony at Dambai — the capital of the Oti Region — last Thursday, the President explained that the two projects would aid the development of the region, carved out of the Volta Region as one of the six new regions.

The President, who was on a two-day working visit in the region, was accompanied by the Youth and Sports Minister, Mr Isaac Asiamah; the Minister of Sanitation and Water Resources, Ms Cecilia Abena Dapaah; the Deputy Sanitation and Water Resources Minister and Member of Parliament (MP) for Krachi East, Mr Michael Yao Gyato; the Minister of Regional Re-organisation and Development and the MP for Okere, Mr Dan Botwe; and Oti Regional Minister, Nana Kofi Owusu Yeboah.

He expressed confidence that the projects would provide job for the youth, stressing that the creation of jobs for the youth was his topmost priority.

President Akufo-Addo also emphasised that the building of the compost plant was part of his dream to make Ghana the cleanest nation in Africa.

He appealed to the chiefs and the people to vote for the New Patriotic Party in appreciation of the government’s creation of the Oti Region and other projects.

Ms Dapaah explained that the project was a priority of the President, pointing out that it would help in recycling solid waste into renewable resources.

The Executive Chairman of the Jospong Group of Companies, who also doubles as the Chief Executive Officer (CEO) of Zoomlion, Mr Joseph Siaw Agyepong, said the project would create 75 direct and 250 indirect jobs for the youth.

He said the plant would receive waste from areas, including Dambai, Biakoye, Jasikan, Krachi East and Krachi West, among others.

The Krachiwura and President of the Oti Regional House of Chiefs, Nana Mprah Besemuna III, commended the President and Zoomlion for the project, saying they would alleviate the unemployment challenges among the youth in the region.

He said the President had been very faithful to his promises to the region, and endorsed his second term bid.