“The end is nigh,” some insinuated following reports that about 70% of candidates purported to be from Wontumi’s camp lost the New Patriotic Party (NPP) constituency elections in the Ashanti Region held from April 28, 2022, to May 2, 2022, to new entrants.

The narrative was that the profound defeat was proof of how unpopular Wontumi had become in the region, making him a bad choice as party chairman, especially, when the party has a ‘break the 8’ task to achieve.

For those who have keenly followed national elections, the NPP’s victory or otherwise in presidential elections, to a large extent, depends on the party’s performance in the Ashanti Region considered as its strongest hold and so the conversation about who wins the regional chairman position was arguably the topmost among the other regions but that was not the only reason the region had the eyeballs.

The rest of the aspirants were a former Member of Parliament for Ejisu, Kwabena Owusu Aduomi; a former Asokwa Constituency Chairman, Robert Asare-Bediako, popularly known as Chairman Asare-Bediako, and Oheneba Kofi Adum Bawuah.

Why the two-horse race

Breaking ranks with vociferous Wontumi to contest him was enough to create tension and court conversation but reports of having big wigs in the party supporting him [COKA] made it intense. With a message that the NPP required a new direction and leadership to restore the party to its status as a formidable force, COKA, obviously needed a strong team to accomplish his mission of unseating Wontumi.

COKA, according to reports, represented the part of the party folks allegedly sidelined by Wontumi. Beyond that, the politician who was confident of contributing his quota to the party to ‘break the 8’, reports said, had deep pockets to match wealthy Wontumi known to be a mining magnate. But that was not all. COKA was the Dean of the constituency chairmen in the region hence his influence was not to be underestimated.

COKA’s interpretation of his 3rd position on the ballot paper was tied to the NPP’s vision. He interpreted it as an indication he would be leading the party to a third consecutive term in office, a record the NPP is dying to set. As determined as he was, he made known his desire to strengthen the structures of the party and build the capacity of the youth and women wings. 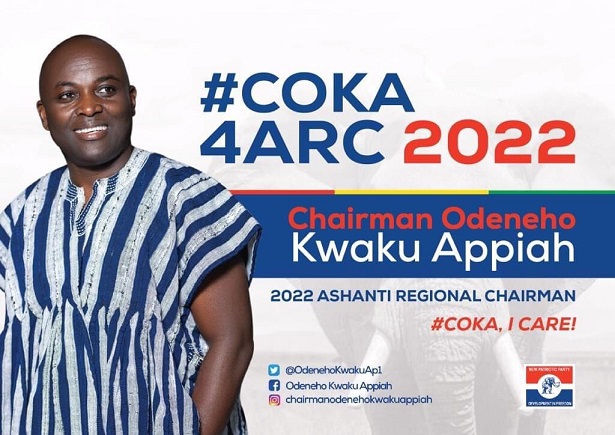 In the midst of all these, Wontumi appeared unperturbed while mounting a strong defense to protect his credibility. He refuted claims he has failed as a regional chairman as he insisted that the NPP won the elections due to the votes polled in the region he led and there was no need to change a winning team that exceeded expectations.

In his interview with Delay, Wontumi unequivocally said science and data favored him.

“Wontumi is loved in Ashanti. By God’s grace, Wontumi will win,” he said as he sounded Biblical. “Indeed, no one can enter a strong man’s house to steal his possessions unless he first ties up the strong man. Then he can plunder his house.”

‘Clash of the titans’ would not be out of place for a description of the Odeneho-Wontumi contest. Both aspirants and their respective supporters aiming for the seat had one task on the election day – be vigilant! Aside from the party paraphernalia that lightened the Baba Yara Sports Stadium which was the venue for the election, the rousing welcome given the aspirants was a gesture that couldn’t have gone unnoticed.

Unfortunately for Chairman Wontumi, his reception was nearly marred after he mistakenly drove into the supporters. He, however, saw to the injured before joining the rest of the delegates who had converged in the stadium.

For some persons who believed in superstition, the incident was a sign of a bad omen for the man clad in white apparel. On the other side were persons who were convinced it was a mistake that had no superstitious connection.