Former President John Mahama has expressed fears the National Communications Authority (NCA) will shut down the internet in the country on December 7 when Ghana goes to the polls.

According to him, the fears are hinged on recent actions of the state agency in their handling of media organisations in their coverage of scandals and opposition parties.

Mr Mahama in an interview with TV XYZ Sunday said his interviews with Kumasi-based Abusua FM some weeks ago was compromised after the frequency of the station was jammed by the NCA.

“One of the tragedies of the Akufo-Addo government is the bastardization of state agencies. And the NCA has been an example. In my recent interview with Abusua FM, we had advertised the show, then on the day, the NCA took their frequency off so they had to shift to Ultimate FM.

“I’m also aware of what they did to Joy when they were going to broadcast that investigative piece on the National Lotteries. Joe Anokye is handling the NCA as a political office. I think on the election day they can shut down the internet or any of the things dictators do. I hope we win and stop all that,” he said.

Mr Mahama also expressed concerns over the conduct of the Police in recent times. He said the image of the Police service has been bastardized by the Akufo-Addo government.

The frequency of Kumasi-based Abusua 96.5 FM has been hit with major interference as the station interviews NDC flagbearer John Mahama.

A similar incident happened when NDC runningmate Professor Jane Naana Opoku Agyemang visited the station on her campaign tour to the Ashanti region.

The frequency was jammed a night before Professor Naana Jane appeared on the show and lasted well for two days before several areas in Kumasi begun receiving good signals from Abusua FM.

The General Secretary of the NDC, Johnson Asiedu Nketia has complained about the seeming regulatory oppression mounted by overseers of the country’s air space and power distributors against the party’s campaigns across the country. 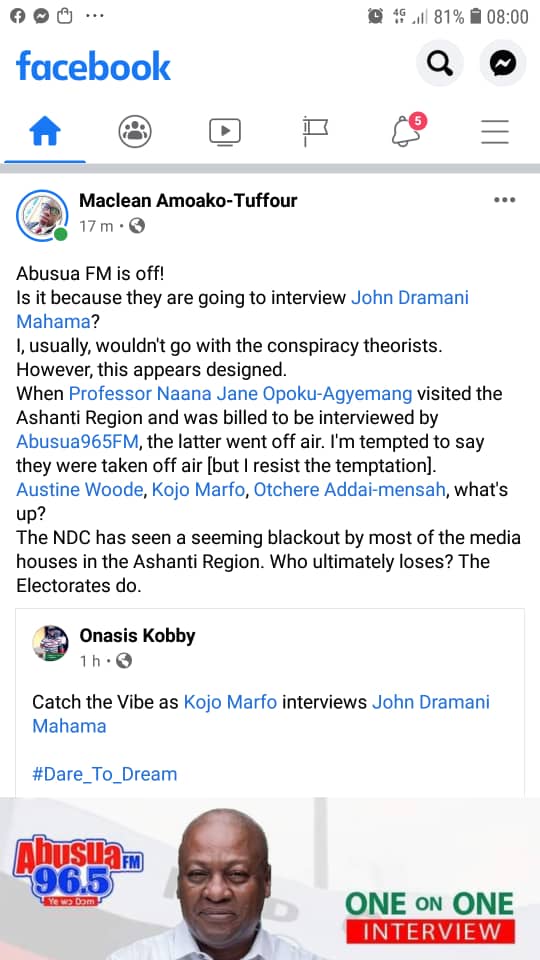 The party in its Tuesday, November 10 press conference complained about intimidation, power cuts and interference of frequencies whenever it moved into any area to conduct its campaigns.

On Wednesday morning, before Mr Mahama will appear on-air, listeners in several areas called in complaining their receivers could not receive signals.

In the Denyame area where Abusua Fm is located, as well as its immediate environs of Ahojo, Santase, Kwadaso and Nhyieso the signals were full of patches and interference.

Management of the station has had to rely on Facebook live and the support of its English platform Ultimate 106.9 FM, to broadcast the feed to the people of the Ashanti region.