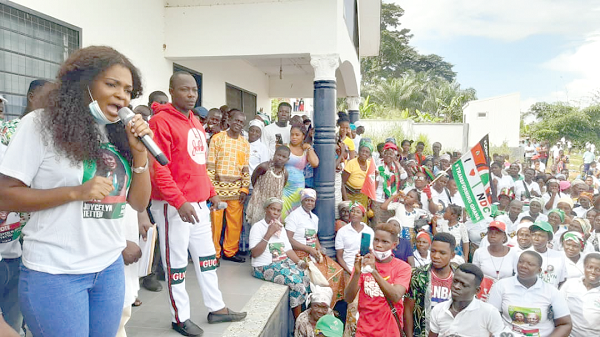 The National Democratic Congress (NDC) Member of Parliament (MP) for North Dayi, Ms Joycelyn Tetteh, has urged the electorate to reject the ruling New Patriotic Party (NPP) and rather vote for former President John Dramani Mahama and the NDC in the December polls for a better Ghana.

She said the NDC had shown commitment to the development of the country and had shown that it was the party that had the ability to provide sustainable development in all facets of society.

“The proposed policies in the NDC’s People’s Manifesto will drastically change the fortunes of the country.

Ms Tetteh made this statement when she addressed party faithful at her residence at Sabadu in the North Dayi Constituency of the Volta Region, after filing her nomination forms to contest a second term as the incumbent.

Ms Tetteh said the policies in the NDC’s manifesto would ensure massive development, empower the youth and ensure equitable distribution of the country’s resources.

She said the National Apprentice Programme, the one million jobs, The Big Push agenda, as well as other policies, were all meant to improve the well-being of Ghanaians and make the country competitive in the world.

For the realisation of the manifesto policies, the MP challenged all NDC supporters to make themselves worthy ambassadors and campaign for victory for the party, adding that “we have to go out and sell the good news of the party to the good people of this country.”