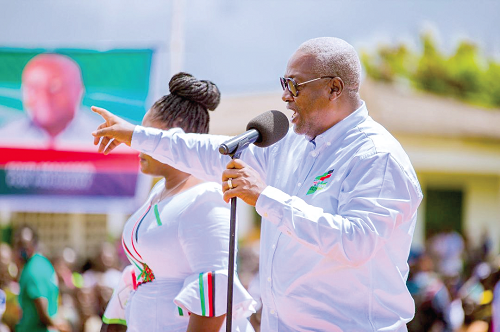 Addressing the chiefs and people of Nkroful in the Elembele Constituency last Wednesday as part of his five-day campaign tour of the Western Region, he said the project would transform the Western Region and also help create jobs for the youth.

“We planned building a free port at Atuabo. Unfortunately, there was a misunderstanding. Our brothers from the other political divide took the project to court, stalled it till we left office and they have completely discarded the idea since they took over power,” the former President said.

This was contained in a press release signed by the NDC Campaign Spokesperson, Mr James Agyenim Boateng.

In July 2014, Parliament approved an agreement between the Government of Ghana and British company Lonrho Ports for the development of an oil and gas free port at Atuabo.

However, Clause 7 of the agreement barred Takoradi Port from further expanding its facilities for oil and gas until Lonrho built its free port, recovered all its costs and made enough profit.

This compelled five MPs, namely Mr Kwaku Kwarteng of Obuasi West, Mrs Hawa Koomson of Awutu Senya East, Mr Joseph Cudjoe of Effia,  Mr Kwabena Okyere Darko-Mensah of Takoradi and Mr Kofi Brako of Tema Central, to file a suit at the High Court to challenge the legality of the establishment of the Atuabo Free Port, but it was dismissed by the court.

The five MPs described the clause as illegal on the basis that under the laws of Ghana, all ports and harbours were supposed to be managed by the Ghana Ports and Harbours Authority (GPHA).

In dismissing the suit, the Presiding Judge, Justice Peter Kwabena Ababio, held that Parliament did not violate any provision in approving the agreement, saying it went through the process according to the Standing Orders of the House.

The statement added that former President Mahama said when he won Election 2020, he would ensure that the project became a reality.

He said he was also committed to fully implementing the free Technical and Vocational Education and Training (T-VET), as well as the state-sponsored National Apprenticeship Programme to build the capacity of the youth and make them competitive on the job market.

On mining, the former President pointed out that an NDC government would streamline the mining industry to enable the youth to take part in responsible community mining under the guidance of a Gold Board. That, he noted, would also help create jobs for the youth.

On the recent balloting by the Electoral Commission, the NDC presidential candidate explained that the second position on the ballot paper was a sign of victory for the NDC in the upcoming general election. #GhanaVotes2020