Johnny Depp said he wanted to cut Elon Musk’s manhood and referred to Amber Heard as “washed up” in angry texts, it has been revealed.

During cross-examination on day 22 of Johnny Depp’s defamation battle with Amber Heard,  Johnny Depp was confronted with a text message he sent to his then-talent agent Christian Carinno in which he threatened to sever Elon Musk’s manhood.

Amber Heard began dating Musk after her divorce from Depp in May 2016. Depp has accused Heard of having an affair with Tesla CEO Elon Musk during their marriage.

“Let’s see if mollusk has a pair,” Depp wrote in the very explicit and vulgar Aug. 15, 2016, text message, referring to Musk by his nickname. “Come see me face to face…I’ll show him things he’s never seen before… Like, the other side of his d— when I slice it off.”

“I can only hope karma kicks in and takes the gift of breath away from her,” he added. Depp admitted he wrote the message and that it was “horrific.”

WATCH: #AmberHeard‘s attorney and #JohnnyDepp got into an intense argument over sexually-explicit comments Depp allegedly made in a text message exchange. “You can pull what you like, I never said those words,” Depp told Benjamin Rottenborn. @LawCrimeNetwork pic.twitter.com/Q5CQn4BUsE 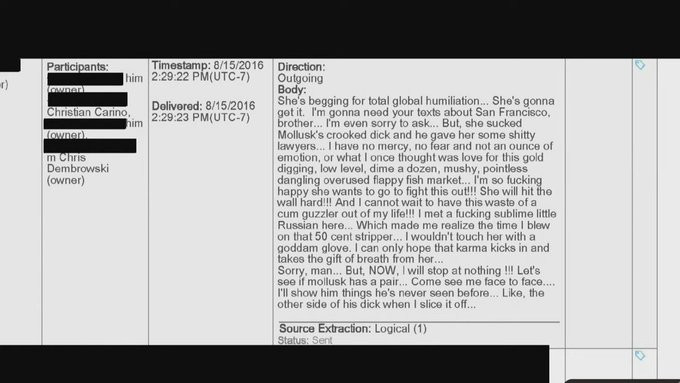 He also claimed that Heard’s claims that he assaulted his ex-girlfriend, supermodel Kate Moss, were “all in her head,” and that he assisted her in landing the role in Aquaman.

Depp is suing Heard for $50 million for implying in a 2018 Washington Post op-ed that he abused her. Despite the fact that she did not name him, he claims her allegations are false and have cost him lucrative film roles.

Heard countersued, seeking $100 million and claiming she was subjected to “rampant physical violence and abuse” at his hands, but was defamed when it was claimed she made up the allegations.