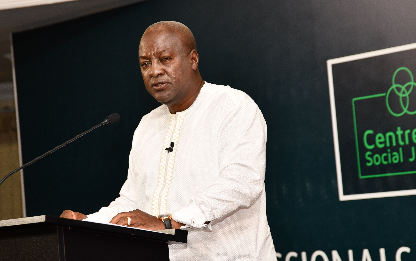 The presidential candidate of the National Democratic Congress (NDC), former President John Dramani Mahama, has said he will focus on the creation of sustainable jobs for the youth if he wins the December 7 presidential election.

Speaking at an interactive engagement with professional groups at the third edition of the Leadership Dialogue Series organised by the Centre for Social Justice (CSJ) in Accra last Monday, he said Ghanaians could trust him to deliver on his job creation agenda because of his track record.

“In my first administration as President, I promised to deliver first-class infrastructural projects and that I did and it’s visible all over the country. In my next administration, I have said we will focus on the creation of jobs,” he said. 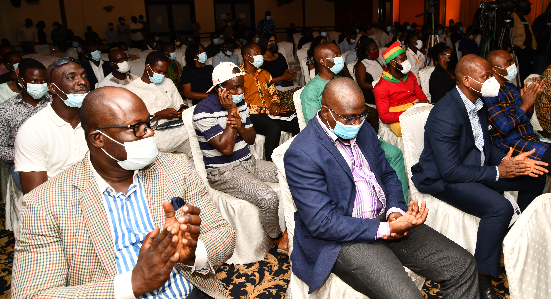 Some participants in the meeting

Mr. Mahama, who made himself available for scrutiny by leaders of the various professional groups in the country, answered questions posed by the Founder of the Alliance for Women in Media in Africa, Ms. Shamima Muslim, and the Head of the Department of Public Management and International Relations at the Ghana Institute of Management and Public Administration (GIMPA), Dr. Lord Wawuko-Yevugah, in a panel discussion.

He also responded to questions by professional groups, including the Greater Accra Market Women Association, the Ghana National Association of Private Schools, the Ghana Medical Association (GMA), the National Union of Ghana Students (NUGS), as well as individual professionals, such as lawyers, teachers and doctors, who were present at the event.

According to a fellow of the CSJ, Dr. Sodzi Sodzi-Tettey, who delivered the welcome address, last Monday’s engagement was envisaged to be a debate between the former President and President Nana Addo Dankwa Akufo-Addo.

He said the dialogue series was created by the CSJ to afford various stakeholders the opportunity to have special encounters with the candidates contesting the December 7 presidential poll.

“We conceptualised today’s dialogue as a head-to-head presidential debate between leaders of the two major political parties. The discussions which we initiated are still inconclusive, however.

“In the absence of a debate, we are grateful to Mr. Mahama for agreeing to have his proposals scrutinised by the CSJ panel and the audience present physically and on social media,” Dr. Sodzi-Tettey said.

Mr. Mahama said his administration would refocus and reorient the operations of the Ghana Exim Bank to promote exports and the creation of sustainable jobs.

He observed that the operations of the bank, which was established by his administration in 2016, had been fraught with “lack of transparency and flagrant abuse of the funds of the bank on non-core activities, to the neglect of many poor and legitimate viable businesses”.
“Business plans begging for credit saddens me,” he added.

He said under his watch, the Ghana EXIM Bank would, in addition to other funding streams, support agriculture and agribusiness for the domestic and export market through the creation of agro-production and processing zones in all major crop producing areas of the country.

“It is our expectation that these interventions will make Ghana self-sufficient and a major exporter of finished goods, such as cashew, cocoa, shea, palm, cassava, pepper, ginger, fruits and rubber, to put money in the pockets of farmers and entrepreneurs,” he indicated.

Mr. Mahama re-echoed the NDC’s vision to partner the private sector to create some one million jobs in four years under the “Edwuma Pa” policy by creating 250,000 sustainable jobs annually to improve the livelihoods of Ghanaians.

The plan, he explained, fitted into Goal Eight of the Sustainable Development Goals (SDGs) which say decent work and economic growth must be attained by 2030.

“In order to foster fairness, transparency and accountability in the distribution of available job opportunities, we shall enact an Employment Act to provide a comprehensive framework for job creation and the collection of labour market statistics,” he added.

On health, the ex-President mounted a strong defence of the NDC’s free primary health care.

He argued that Ghana’s yearly population growth rate of 2.2 per cent was not proportional to the average growth of the National Health Insurance Scheme (NHIS).

“As things stand today, only 40 per cent of our population is on the NHIS and only two per cent of Ghana’s poor, as defined by United Nations, is on our health insurance. This implies that a staggering 98 per cent of those classified as poor in Ghana who are more susceptible to various communicable and non-communicable diseases are excluded from the social protection provided by the NHIS,” he said.

On that account, Mr. Mahama rallied Ghanaians to “support the free primary health care policy contained in the NDC’s manifesto.

He also announced that should he get the people’s mandate in the elections, his administration would develop a 5G technology in Ghana, in addition to training more computer programmers for e-commerce to flourish.

He said he would ride on the back of skills development by improving technical and vocational education to attract more young people.

Mr. Mahama challenged what he referred to as assertions by President Akufo-Addo that the NDC bequeathed the current government a messy economy and empty coffers.

“I left him with $270 million in the Ghana Infrastructure Investment Fund, more than $207 million in the Stabilisation Fund and about $300 million in the Sinking Fund, with which the final payment of the Kufuor Eurobond was paid upon maturity in 2017,” he said.