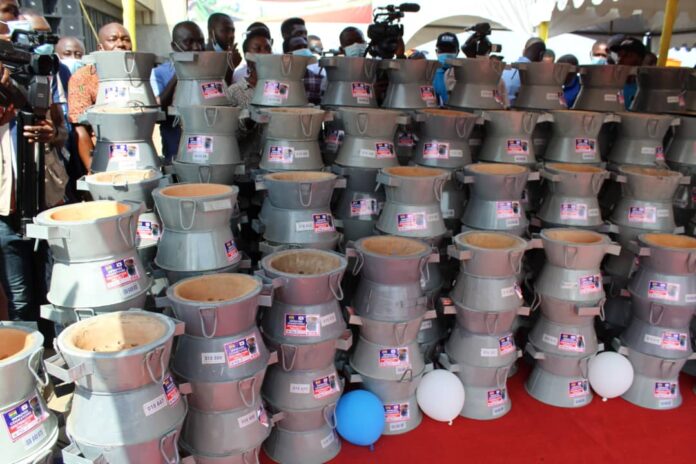 President Akufo-Addo has launched the Ghana Improved Cooking distribution project which will see the manufacturing and free distribution of 500,000 improved charcoal stoves in Ghana to 350,000 rural households across the country by 2021 which will benefit approximately 1.8 million Ghanaians.

Launching the $5.5million South Korea Government funded project on Monday October 26,2020 at Akuse in the Eastern Region, President Akufo Addo said “the five hundred thousand improved cook stoves would be distributed to beneficiary households in all the sixteen (16) regions of the country, using the distribution systems adopted by the Government of Ghana and the Korean investors. This is just phase one. Phase two, which consists of another 500,000 units is being developed for funding, so as to ensure that as many households as possible receive the improved cook stoves,”

President Akufo-Addo explained that the use of these improved and efficient charcoal stoves, coupled with the ongoing reafforestation programmes, has the potential to reduce significantly the emission of carbon dioxide and the rate of deforestation in the country.

He commended the East-West Power Corporation, the Climate Change Centre (CCC), and the Government of South Korea, for providing the grant funding of US$5,500,000.00 to produce locally and distribute 500,000 improved charcoal stoves in Ghana in exchange for carbon credit to offset their carbon dioxide emissions.

According to the President ,this is a win-win situation for the parties involved and by far, the largest Certified Emission Reductions intervention in Ghana and West Africa expected to save a million tonnes of carbon dioxide to help the fight against climate change .

“In terms of the creation of job opportunities, about two hundred direct jobs have been created by this project alone in Ashiaman, Kokompe, Mobole, Achimota, Kasoa, Weija, Cape Coast, and Kumasi, where artisans were engaged in the production of the various components of the stoves. This is expected to increase to some one thousand (1,000) direct jobs, as we scale-up,” President Akufo-Addo said.

President Akufo Addo who is the Co-Chair of the Eminent Group of Sustainable Development Goals Advocates at UN, reiterated the commitment of his government towards climate change mitigation,stating that, major programme of action of government is, thus, the adoption of cleaner cooking solutions by scaling up the use of LPG in households.

“I am happy to inform you that significant progress has been made and very soon the program for the LPG cylinder recirculation model, which will ensure wider use of LPG throughout the country, will be launched,” he said.

He added “Since it will be difficult to have all households switch to the use of LPG, in the short term, our strategy is to promote the use of two million improved and efficient wood-fuel stoves as an interim measure, until such time that all households eventually migrate to LPG or electricity as main cooking fuels.”

The Republic of South Korea Ambassador to Ghana and Togo, Mr.Kim Sungsoo , said the carbon dioxide emissions by the stove will be trade to meet Korea Government Carbon dioxide footprint .

He said the project which will be implemented in the period of five years aside helping mitigating climate change impact ,would also improve health of rural folks who use biofuel as a source of energy .