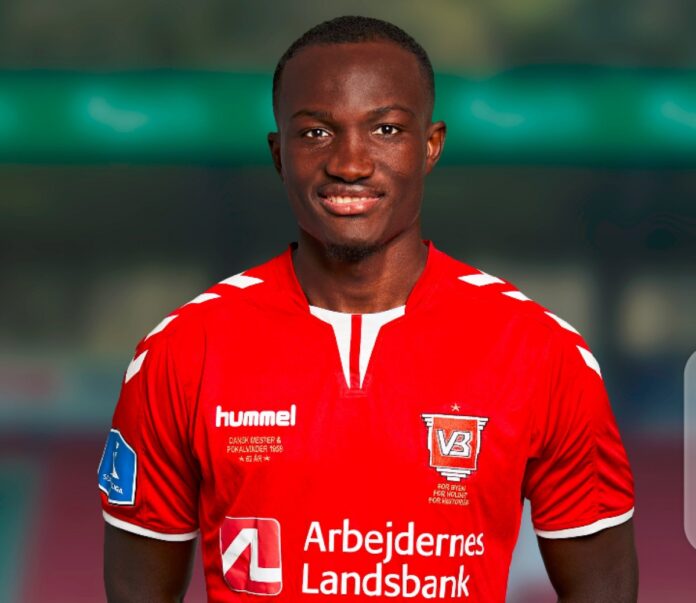 Striker Raphael Dwamena’s career has suffered another big setback after his Danish team Vejle Boldklub terminated his contract due to his heart condition. The club announced on Monday that they have been forced to withdraw the Ghana striker from the pitch.

Rapheal Dwamena’s heart problem first came up in his botched transfer to English Premier League side Brighton and Hove Albion who turned the deal upon discovering the condition.
It came up again during his loan spell at Real Zaragoza last year and that led to his loan spell been cancelled by the Spanish club.

The Levante-owned player then had a heart surgery in January, where the Black Stars attacker had an ICD-Implantable Cardioverter Defibrillator-implanted to keep track of his heart rate.

When he arrived at Danish side Vejle, the club’s health staff and medical team monitored him-in training and during matches-and have come to the conclusion that it will be risky to continue playing him.

Vejle Boldklub technical director Jacob Krüger explained: That there has now been one case where the limit values ​​have been too high, we must, based on a health professional assessment as a club, take the consequence of. Raphael Dwamena is therefore taken off the field.

”We are, of course, sorry on Raphael’s behalf, but the parties have been aware from the outset of the consequence that would have been the case if Raphael’s monitoring had exceeded the limit values ​​in the measurement.

”Raphael Dwamena has in his short time in Vejle Boldklub shown a great human format, a professional approach to his profession and a desire to learn from his young players. We will now help Raphael in the new situation.”

Rapheal Dwamena had scored two goals in five matches for the team.