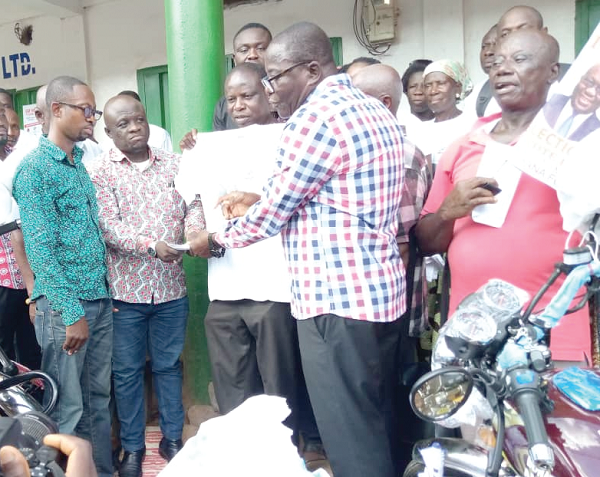 Election 2016 Independent parliamentary candidate for the Sunyani East Constituency, Mr George Kumi, has made a comeback to the governing New Patriotic Party (NPP).

Mr Kumi announced his comeback with a donation of GH¢10,000 and five motorbikes to the NPP in the Bono Region.

Apart from the cash and motorbikes, the former Ghana’s High Commissioner to Nigeria also donated about 400 NPP-branded T-shirts and assorted party paraphernalia to the party.

Two of the motorbikes, GH¢5, 000 out of the GH¢10, 000, as well as 200 T-shirts among other items donated by Mr Kumi are to be used by the regional secretariat of the party while the rest are meant for the use of the Sunyani East secretariat.

Mr Kumi chose to run as an Independent candidate in 2016 after a disputed primary in which he lost by two votes to the incumbent Member of Parliament, Mr Kwasi Ameyaw-Cheremeh.

The primary election was marred with accusations and counter accusations, which culminated in the Sunyani High Court ordering a recount.

During Election 2016, Mr Ameyaw-Cheremeh garnered 38,009 representing 54.45 per cent of the total votes, while Mr Kumi got 15, 911 representing 22.79 per cent as an Independent parliamentary candidate.

It was, therefore, joy for the NPP faithful when he visited the regional secretariat of the party to provide support for the campaign.

Addressing the media after the donation, Mr Kumi said President Nana Addo Dankwa Akufo-Addo deserved four more years to continue with a number of good policies he had embarked on to break the poverty cycle of Ghanaians.

He mentioned the Free Senior High School, Planting for Food and Jobs, One-district, One factory, among others, as some of the brilliant policies which would change the destiny of the country.

Mr Kumi also commended the government for introducing the Nation Builders Corps, explaining that it would ensure that graduates from the various tertiary institutions were given the necessary training before they were formally employed.

“We need to give the president ample time to continue with these policies since entrusting the destiny of the country into the hands of the NDC will be an unpardonable mistake”, he stated.

The Bono Regional Secretary of NPP, Mr Kofi Boateng, who received the items, thanked Mr Kumi for his gesture and promised that they would be used for the purpose for which they were donated.

In an interview, the Bono Regional Communications Director of NPP, Mr Asare Bediako, said the presentation had come at the right time to support the campaign team in its bid to increase the popular votes for President Akufo-Addo.

“The campaign strategy for this year’s election has changed because of COVID-19 and we therefore need items such as motorbikes in order to reach out to the electorate to canvass for their support and votes,” he said.

Mr Bediako commended Mr Kumi for his gesture, explaining that his comeback was a sign of victory for the party in the December 7, 2020 general election.