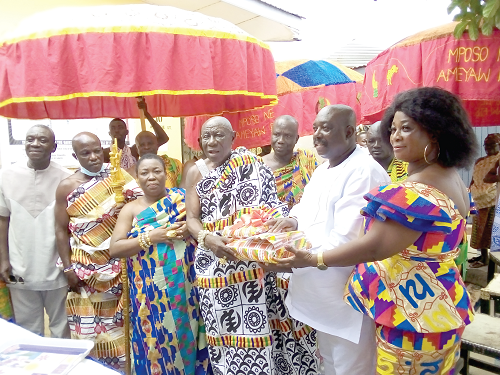 The Chief of Effiduase in the New Juaben Traditional Area, Nana Okoawia Dwomo Baadu II, has admonished supporters of the various political parties contesting the December 7 general election against all forms of violence at the polls.

Nana Baadu, who is also the Nifahene of the area, said violence at the polls would not augur well for the country’s development as it could create a state of political instability and anarchy which would stall development and create hardship.

“Ghana is our only home, we have nowhere to go if we destroy this beautiful and peaceful country of ours. We must not let election, which is a mechanism through which we choose our leaders, divide and destroy us,” he said.

He was speaking at a mini durbar to celebrate this year’s Akwasidae Festival at Effiduase.

Nana Baadu said politicians and political parties had a responsibility to campaign in a manner that would promote peace and unity, and not division.

He described any politician who encouraged violence either openly or subtly as someone who did not have the nation’s interest at heart.

“We need to understand that violence has no place in this country and should not be encouraged at all,” he said.

To prevent violence, Nana Baadu called on the security agencies to ensure that any troublemaker or instigator faced the full rigours of the law.

“We must apply the law without any fear or favour. The interest of the nation must be protected at all times,” he said.

At the event, more than 100 copies of a book titled: Fundamentals of Leadership written by Major General William Omane Agyekum, the Commandant of the Military Academy and Training School (MATS), were donated in large quantities to Nana  Baadu II for onward distribution to some basic and senior high schools in the area.

For his part, Major General Agyekum urged the beneficiary schools to make good use of the books to prepare their students well for future leadership positions.

Education, he said, was the surest way of locking the door of poverty and, therefore, called on the students to be serious with their studies.