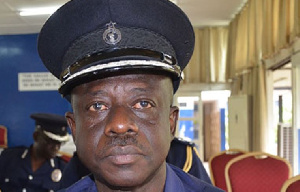 The Ashanti Regional Police Commander, Commissioner of Police (COP), Mr. Kwasi Mensah Duku, has assured the electorate in the region of maximum security during and after the elections.

He, therefore, urged the electorate to come out in their numbers on election day to vote without any fear of harm.

“The police are firmly on the ground and ready to provide the electorate with the maximum security,” he stated.

Mr. Duku gave the assurance at the inauguration of a police station in the Asuoyeboa North community in the Kwadaso Municipality yesterday.

He said the Ghana Police Service was well prepared to curb any disturbances and warned that the police would not tolerate any interference from anyone in the discharge of its duties.

The assurance came in the wake of the report by the Small Arms and Light Weapons Commission which cited the Ashanti Region as having the highest number of flashpoints in the country.

According to the report, the region had over 635 flashpoints which were all potential for conflicts and violence in the country.

Just last weekend, supporters of the National Democratic Congress (NDC) from Asawase, besieged the Suame Police Station to demand the release of some suspects who were arrested in a police swoop.

The supporters were alleging that the arrest was part of machinations of the ruling party to intimidate NDC supporters in the constituency to enable the New Patriotic Party (NPP) to annex the seat from the NDC.

Mr. Duku allayed the fears of the electorate in the region that no one was intimidating anybody and that the police was only enforcing the law stressing that anyone who flouted the law would be dealt with irrespective of the person’s political affiliation.

He said the police would not be cowed to relax the rules just because of political victimisation.

Mr. Duku said the provision of security was a shared responsibility and commended the Kwadaso Municipal Assembly and the Landlords Association for collaborating to build the police station.

He said even though it was the responsibility of the government to provide the citizens with police stations, the reality on the ground was such that the government alone would not be able to do that.

He said it was, therefore, necessary for the private sector to assist the government to provide at least the infrastructure while the government provided the men to man the post.

The Ashanti Regional Minister, Mr. Simon Osei-Mensah, commended the traditional authority of the community for earmarking and releasing land at a prime location for the construction of a police station.

He said the police station was a good example of a Public-Private Partnership that had lots of benefits for the community.