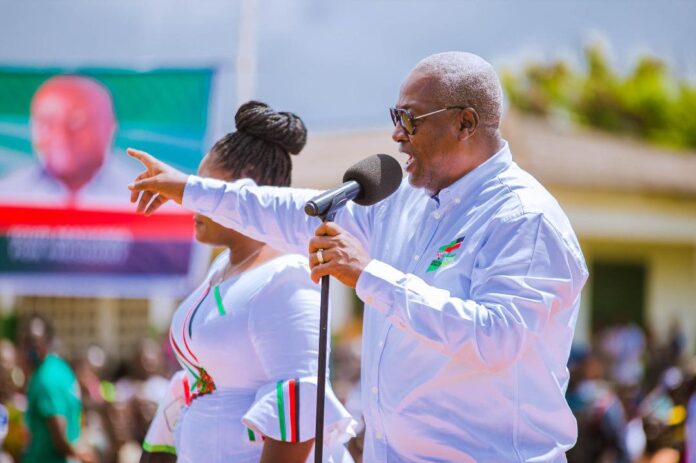 The Paramount chief of the Alavanyo Traditional Area, Togbega Tsedze Atakora VII has said that the flagbearer of the National Democratic Congress, John Dramani Mahama deserves praises from the chiefs and people of Alavanyo for his choice of a running-mate.

According to Togbega Atakora, the choice of Prof. Naana Jane Opoku Agyemang who is connected to the people of Alavanyo is an action that deserves commendation.

He made the statement while addressing a durbar in honour of Prof. Naana Jane Opoku-Agyemang who was on a home visit to Alavanyo as part of her 3-day campaign tour of the Volta region which ends later this evening.

“I’m very much aware of the 1992 that says chiefs should not take part in active politics but I have not read any part of the Constitution that says you don’t praise someone when he does the right thing. So if President Mahama has decided to choose a Professor, who relates to Alavanyo as his running mate, does the Constitution debunks me from praising President Mahama?

Togbega noted also that beyond the selection of a running mate that relates with the people of Alavanyo, the erstwhile John Dramani Mahama administration initiated several projects in his area.

“A few year ago, Ladies and Gentlemen, the road from Kpando Konda to Wegbe was a dusty one, so if you drive from Alavanyo to Kpando, someone would have to dust your hair for you. The same way if you’ve to drive from Alavanyo to Hohoe, someone would have to use a rag to duster your hair for you but President John Dramani Mahama decided that the road from Kpando Konda to Wegbe must be tarred and that’s why almost all vehicles are using the Alavanyo road. So if President Mahama has done these, is it a crime to praise him,” he questioned.

“And then, so many other things that have followed like schools; you can see the school building over there amongst many other developmental projecrs,” he added.