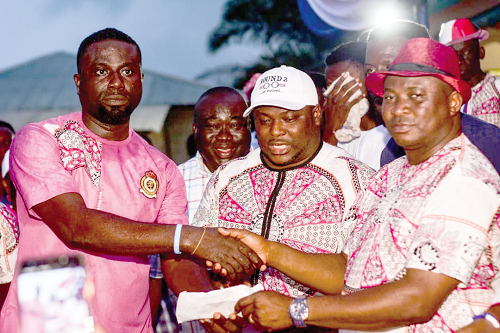 The New Patriotic Party (NPP) parliamentary candidate for the Akyem Oda Constituency, Mr Alexander Akwasi Acquah, has called on all splinter political groups of the NPP to join forces and campaign vigorously for a resounding victory in the upcoming general election.

He stressed that the December 7, 2020 general election was so crucial to the NPP and the development of Ghana that the party must not go to sleep but rather campaign vigorously for victory.

Mr Acquah made the call at the inauguration of the Oda Constituency branch of Pink Ladies Ghana, another women’s grouping of the NPP at Akyem Oda in the Eastern Region.

He advised the NPP members to translate their massive attendance at the ceremony into votes on December 7, 2020 in order to get 80 per cent presidential and parliamentary votes to enhance the chances of the party in the upcoming general election.

Mr Acquah enjoined the NPP members to bury their differences and work in unity to enable President Nana  Addo Dankwa Akufo–Addo to win a second term for him to continue with his effective governance, and for him (Mr Acquah) to also win as the Member of Parliament (MP) for the constituency.

He urged them to intensify their house-to-house and door-to-door campaigns to encourage as many eligible voters as possible to vote for the NPP come December 7, 2020.

According to Mr Acquah, the second term of Nana Akufo-Addo’s administration would be a massive improvement on the administration’s sterling performance in the first term.

He said President Akufo-Addo had a vision of turning Ghana into a cradle of development and economic growth for the benefit of all Ghanaians and, therefore, he needed a second -term to complete his development agenda for the country.

The Municipal Chief Executive (MCE) for Birim Central, Ms Victoria Adu, was full of praise for the National Women’s Organiser of the NPP, Madam Kate Gyamfua, for encouraging more women in the party to play very active roles towards the party’s victory in the upcoming general election.

She urged the Pink Ladies Ghana to conduct their campaign in a civil manner devoid of insults, personal attacks and vituperations to ensure incident-free polls this year.

The National President of Pink Ladies Ghana, Madam Gifty Boamah, who inaugurated the political grouping, urged the members to move to all nook and cranny of the constituency to convince the electorate to vote massively for President Akufo-Addo and Mr Acquah on December 7, 2020.

The Oda Constituency Chairman of the NPP, Alhaji Awudu Issaka, on behalf of the MP for Oda, Mr William Agyapong Quaitoo, donated GH¢1,000 to the Pink Ladies Ghana while the MCE and Mr Acquah also gave the association GH¢1,000. #GhanaVotes2020