Since it was her first n-ked scene following her 2013 double mastectomy, Angelina Jolie contemplated deleting a swimming sequence from By the Sea.

Angelina Jolie openly disclosed the surgery earlier this year, but she was terrified when it came to a scene in her new film.

In a new interview with the New York Times, she said, “There were lots of scenes I wanted to change or cut. I realized it was going to be me [n-ked] in that bathtub. But I told myself, put all of that aside.

Like, you can’t change or cut this scene because you’ve had a mastectomy, or because we’re married and people are going to analyze this or that. That would be cheating.”

Jolie and her husband Brad Pitt play a vacationing couple who are attempting to salvage their marriage in the film. It’s the first time they’ve worked together since the spy thriller Mr and Mrs Smith in 2005.

The pillow-lipped beauty wants everyone to know that she and her third husband, who will turn 52 next month, are far from flawless.

‘If people think these are our particular issues, well, that’s wrong,’ Angelina pointed out.

‘But if they want to think we have terrible fights, are imperfect, have insecurities and can be depressed and emotional, of course that’s true. We have problems, arguments. We are two very human, flawed people. And I think that’s a good thing to show.’

And she added that directing the film was difficult because of her character’s vulnerability, especially during s-x scenes with heartthrob Pitt. 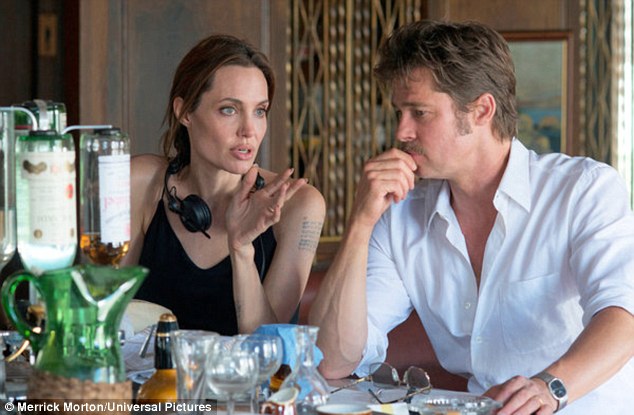 “The duality – being a director, then having to become a person that vulnerable – would often be hard,” she remarked.

“There’s a whole reel of me calling ‘cut!’

“If a doctor saw it, I’d be put on medication.

“You had to laugh at how bizarre it was.”

The film was shot in Malta shortly after Jolie and Pitt, 51, married in August 2014 at Château Miraval in Correns, France. Filming has been described as their “honeymoon” by her.

“A few days into filming I thought: This is such a bad idea. What was I thinking?” she told the New York Times. “This is going to destroy us before we’ve even gotten started. But by the time we got to the end of the film, we’d argued, challenged each other, disappointed each other, had good days, bad days, all of it. We’d pushed through, learned something about each other, found a new working relationship and came to like the idea of ‘Yeah, it gets really bad, but you work it out.’”