It is strange to know that a pen used in writing a folder at a hospital has to be paid for by a patient. This is really a painful moment for a family who have lost their relative at the only referral center in the Western Region, the Effiankwanta Hospital.

The man, whose name has been given as Paul Okine fell sick and was sent to the SDA Hospital in Takoradi, his condition became severe and the health officers at the facility referred him to another private hospital. After spending a few hours there, his situation was not getting stable and they had to refer him to the Efiankwanta Regional Hospital.

The nurses and doctors on duty at the time quickly organized oxygen to save his life. He received about five oxygen at a time and his situation later became stable. Different tests were conducted to know the real cause of his condition and the doctors and nurses communicated to the wife, Margaret Okine that the husband has tested positive for coronavirus.

Both the husband and wife were shocked about the news but no document was given to them to prove that the husband indeed has tested positive for coronavirus. An ambulance was quickly organized for him to be taken to the coronavirus treatment center.

The nurse on duty according to the wife asked the family to pay an amount of GHC 100 as a fee for the ambulance but that was not all, she again told her to pay another GHC 20 for the pen she will use in preparing the document (folder) for his stay at the coronavirus treatment center.

At that moment, the wife and the rest of the family were shocked because the pen was possibly procured by the hospital to be used by all so for them to pay GHC 20 for the pen was quite serious. But another question that boggles minds is the price of a pen at the market.

But the health of the husband was very paramount to her so she had no other option than to pay. No receipt was given by the so-called nurse on duty and the ambulance moved to the coronavirus treatment center.

Soon after getting to the center, another test was conducted and the nurse on duty whose name has been given as Kate communicated to them that the husband is negative for coronavirus.

Here, the wife was confused because an earlier test by a doctor has confirmed the husband was positive even though no document was given.

She left the husband and went home to prepare some food for him. It was there that someone called with the husband’s phone and broke the sad news to her. The husband had unfortunately collapsed and died on allegations that he left the center unnoticed. 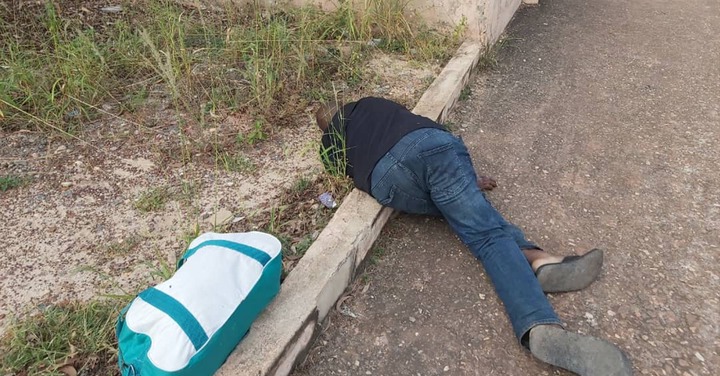 The husband doubted he had coronavirus and decided to run from the treatment center. He collapsed along the way and died on the spot. The family is unhappy about the situation and wants thorough investigations into the issue.

In the meantime, the Public Relations Officer for the Effiankwanta Regional Hospital, Mr. Christian Baidoo has admonished the family to remain calm as the hospital launches investigations into the allegations.