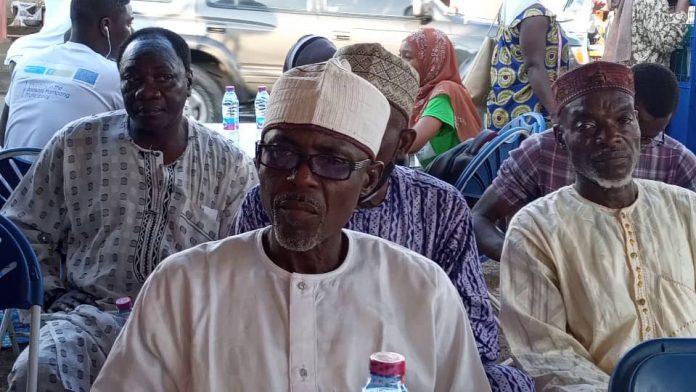 
The electoral hot spot of Aboabo in the Asokore Mampong Municipality has turned a vibrant area for peace advocacies with barely two months to elections.

The area is top on the list of election flush points in the Ashanti Region – which now has the highest number of areas where election-related conflicts easily erupt.

Led by the No Business As Usual Project, Community leaders, advocacy groups, CSOs and Islamic leaders have pitched tents sensitizing the youth to resist politicians recruiting their peers as bodyguards and henchmen for electoral violence.

Programs Manager with the NBU Hub Vincent Ohene-Ntow underscored how the violence tag on Aboabo was driving away the investments needed to address Aboabo’s developmental challenges.

He pointed out, “Without peace, there can be no form of development so NBU had to step in to educate our youth and make them to resist all forms of inducements and influences from the political actors before during and after the elections.

The National Commission on Civic Education in the Asokore Mampong Municipality has begun working with advocacy groups to sensitize the youth to steer clear of acts that might mar the peace of the community in the pending elections.

Its director Matthew Agbenu outlined, “my outfit is making whistle stops, going into mosques, churches and community gatherings to preach about peace because it is on record that this community is a centre for electoral violence.”

Islamic clerics in the Zangos told Ultimate News they had not neglected the preaching of peace to their congregations.

An Islamic scholar in Aboabo Uztaz Abdul Rahman Omar found it unthinkable why the youth – a majority of whom are Muslims – easily resort to fighting when the religion preaches peace in all its mosques.

“God preordains the outcome of elections and no one by their acts of violence can change this,” he contended.

A young man born and bred in Aboabo Abdul Rahman, told reporter Ivan Heathcote – Fumador, the memories of the 2016 clash between two keep fit clubs belonging to the NDC and the NPP are still fresh on their minds.

He warns until ringleaders of known gangs in the community are held behind bars before elections, politicians can exploit their quest for retaliation, to hire them to do their bidding.

A political youth leader in Aboabo. Mohammed Alhasan was worried the name of Aboabo continues to feature in the news for all the bad reasons.

He cautioned his peers to be vigilant, demand their due from politicians and refuse to perpetrate acts of violence on behalf of any political party.

“Whenever its elections, they come to promise our boys that they will do this and that. This time when they bring the money take it, thank them and don’t follow them. Be vigilant and ask them to give you jobs,” he admonished.

The stakes are high in Aboabo which stands as a nerve centre where the New Patriotic Party’s parliamentary candidate Alidu Seidu and the incumbent Alhaji Mohammed Muntaka Mubarak are hoping to sweep a majority of the votes.

This will be the second time the two will be locking horns to represent the constituency in parliament.